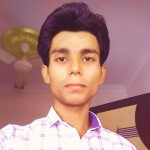 "Hello' I am Kamlesh Kumar , an Aspiring Blogger with an Obsession for all Things Tech . This Blog is Dedicated to Helping People Learn about Technology.